The 15-M movement seems to be at an impasse, unsure of how to make use of its multiple victories and enormous public support. To break out of this situation, numerous organizations, assemblies and collectives are repeatedly appealing to the ideal of unity (amongst the political left, the movement, the “bottom 99”) as a means of reaching the necessary levels of coordination needed for standing up to, and defeating, the government and markets. However, so far it doesn’t seem like their ideals-inspired efforts have led to any noticeable improvement in the organisational capacity of the movement. Prior to the birth of 15M, it was not uncommon to see initiatives by the political left coalescing around ideals of convergence, coordination and unity, with generally poor results. Our hypothesis is that these traditional modes of political organisation have grave shortcomings, needing urgent revision. What can we do when the old ways aren’t working anymore? Do we forfeit our experience? Go our separate ways? Surrender to the idea that revolution can only be chaotic and spontaneous? Nothing could be further from what we’re about to share here.

The fact is that since the birth of 15M, we’ve spent more than two years experimenting with radically new modes of mass organization. Crowds capable of synchronizing en masse, to attack or to defend themselves at specific moments and with blinding speed; initiatives that detach from the movement at strategic junctures to then develop on their own, opening new spaces for confrontation; mechanisms capable of mobilising huge sectors of the population when they’re most needed…new forms of mobilisation that have come to stay. We’re rehearsing the mass social self-organisation methods of the future, and we’ve managed to create a scenario for hegemony and social conflict the likes of which we’d never have imagined. An understanding of the organisational models that have led us here is paramount for forging ahead.

The reductionist focus: unity as convergence

In our opinion, most attempts to coordinate unity amongst “the movement” (or “the left”, or “pick-your-favourite-social-subject”) stem from a terribly reductionist mindset: unity as convergence. The simplest structural example would be organizations with tree-like dynamics, where decision-making and consensus-building processes are redirected to a series of increasingly centralised nodes within the overall structure, from “collective coordinating” assemblies for citywide initiatives to state level structures that coordinate the activities of local nodes. Any time convergence is mentioned, it goes hand in hand with an appeal towards promoting narrative and discourse; for example, reaching consensus on collectively created manifestos is used as an prime example of unity. In the end, it comes down to creating space that functions as the ultimate representative for the movement. A kind of centralised brain that, ultimately, both hierarchically coordinates and makes decisions on behalf of all the other spaces. The problem is that this vision of unity though convergence, within tree-like structures, doesn’t work, at least not in the hyperconnected societies of the XXI century.

Convergence can work at a reduced scale or in simple organizational structures. However, in more complex scenarios, it generally leads to heavy, slow, expensive, and high-maintenance structures. These are usually marred by rigidly determined, inside-outside distinctions that quickly face major difficulties when needing to add new participants at moments of peak activity. And yet today, despite knowing full well the limitations of this model, we are witnessing a revival of this so-called convergence. This is especially surprising when we take into account that most of the mass-scale mobilizations we’ve seen across the world in the last few year, from Arab Spring and 15M to Occupy Gezi, hardly bear any resemblance to this type of organization. On the contrary, they’re processes of coordination and synchronization of large groups without any apparent formal organizational structure. In the best of cases, centralised structures only arise when the movements are on the wane, or losing their power of assembly. Faced with this scenario, we need new modes of unity to create unifying processes in societies where technological networks grant us an enormous capacity for large-scale social auto-organization.

How do you organise a system comprised of millions of parts, with no hierarchical structure nor centralised controlling organ? The field of neuroscience faces a similar problem. The brain is a highly distributed and interconnected organ, capable of organizing itself to enable a great variety of complex, coordinated behaviors. Hundreds of thousands of neurons in the human brain are capable of coordinating and forming a single structure, but it’s highly unlikely for this to happen by means of converging structures. Convergence in the brain isn’t a plausible scenario, as there’s no central area to centralise the rest. Besides, it has been demonstrated that models of neuronal convergence lose most of their efficacy at large scales due to problems arising from combinatorial explosion 1. An additional, and major, problem is that convergence strategies aren’t effective at adapting to new situations that require unexpectedly different behaviours (that is to say, they’re not good at improvisation).

Dynamic nucleus and poles of reference in the 15M movement

Do revolutions work like our brains do? Or, to put it another way, do we function as a collective brain when we enter a revolutionary climate? We’re still searching for answers even as new questions arise. For now, what we do know is that the mechanisms of unity in the human brain are very similar to the processes of distributed social mobilization we are witnessing. Regarding 15M, the movement has been a succession of different “dynamic nuclei” serving as poles of references during the periodic organisation of enormous processes of synchronized coordination: the summons for the initial protest by DRY, the encampments, the PAH, the Citizen Tides, the 25-S protests, etc. 4 Some of the reference poles have been global, others more local. Some have lasted weeks, others no more than a few days. Some have disappeared to rise again later, unexpectedly, and brimming with renewed strength. What they have in common is that they’ve all been capable of organising large sectors of the population — and not always the same ones — acting with coherent unity, as a great collective mind capable of overwhelming and seriously wounding the regime’s institutions.

But there remains a general perception that this is not enough. The old political parties still occupy the institutions, blocking any possible change. This is a fact, but we don’t think that the problem rests on the limits of this model of organized distribution. Rather, we think it’s a question of not having developed adequate mechanisms to act as poles of reference in a space with dynamics as particular as those of the electoral space. We believe it’s only a matter time until society organizes to dismantle the electoral space. There are, in fact, various initiatives underway with this purpose in mind.  We predict that only those who have understood the logic of distributed, networked processes of self-organisation and participation will succeed.

We’ve spent two years organising in radically new ways, and the results have been astounding. We’ve built structures that have generated total hegemony amongst the movement and over the most crucial axes of social conflict (housing, education, healthcare, democracy, etc.) Structures endowed with the sort of on-the-ground organization capable of scuttling any attempt to hide, repress or criminalize the movement. This has just begun. The same neuronal synchronization we’ve described organises itself at different nested levels, and through increasingly influential protocols of auto-organisation built on top of previous, smaller ones. We have a model of auto-organisation that works, we only need to replicate, improve and understand it more deeply, to extend it to new levels.

We’re convinced that in the coming months and years we’ll keep on seeing vast advances in forms of networked organisation. To improve on them, it is essential to keep formulating hypotheses to create new poles of reference capable taking in and coordinating other areas of conflict. To keep listening to and analysing the process, in order to identify and interpret points of rupture. Being able to experiment and strategically connect or disconnect components from our dynamic nucleus to claim victories. To construct the sort of unity that won’t get trapped in a determined configuration, but which constantly transforms to keep moving forward. We’re at an historic juncture; we’re taking the first steps towards the construction of a collective, fluid and distributed coordinated social mind. Insisting on obsolete modes of organisation is a error. We are rehearsing the methods of massive social auto-organisation of the future, and the perspectives are more than optimistic. The dying bipartisan regime is confounded and entrenched. We only have to keep syncing.

2. [Varela, F., & Thompson, E. (2003). Neural Synchrony and the Unity of Mind: A Neurophenomenological Perspective. In The Unity of Consciousness. Oxford University Press.]↩

4. [These are all groups and collectives enmeshed within the 15 -M network. Briefly:

To read about these, and many other, initiatives taking place in Spain right now, read our translation of Bernardo Guitérrez’s “Spain’s Micro-Utopias: The 15M Movement and its Prototypes”]↩

This translation has been republished on: 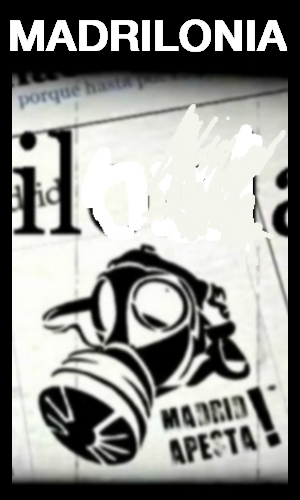 Madrilonia is an initiative formed in Madrid, Spain, free from institutional or political funding. Their politics deal with sharing the general pissed-offedness of the times, and then in turn directing that feeling towards those who deserve it. Read more...