Ah, the joys of homeownership and mortgage payments. We at Guerrilla Translation take these issues very seriously, so we’ve brought in an expert to tackle this ever pressing concern.

Artivitist Leónidas Martin is the co-author of our recent translation “12 Inspired Actions to Outsmart Repressive Situations and Laws”. In the following lines (and videos), Leo reminisces about an illustrious career characterised by smashing world records, and interviews some of his buddies addressing the housing crisis in their own peculiar way.

First up, we have the TV ad leading up to the world record…

“A call for the World Record we set for the most people shouting, “You’ll never own a house in your whole fucking life” (sadly, Guinness wouldn’t recognize our feat). An event that gathered hundreds and hundreds of people in cities all over Spain to shout, collectively and publicly, what had been experienced until that moment as a personal problem.”

How did this illustrious event come into being?

The baby says “The mortgage is KILLING ME!”

An anonymous email started making the rounds on the net, summoning thousands of people to protest against rising home prices and speculation on May 14th 2006, at the same hour, all across Spain. The protest was repeated during many a subsequent Sunday and, lo and behold, something like a social movement had sprung up, with a regular assembly organising a bevy of activities (marches, press conferences, actions, media appearances, etc). Within this context, it didn’t take us long to realise that we were a varied bunch: graphic designers, teachers, activists, hairdressers, actors… the lot. This held a potential, a cornucopia of riches that we immediately exploited; this is the origin of all the design and creative elements that made Vdevivienda 1 such a visible phenomenon (graphic campaigns, videos, action staging, etc). Every production made within this open, creative, diverse and cooperative framework was an example of collaborative creation. It was delightful.

And to wrap it up, this thrilling Ramones-song-length documentary on the making-of the World Record. Here’s what Leo has to say on the subject:

The “Fuck-o-meter”. You saw it here first.

On October 6th, 2007, we beat a new world record. Thousands of people in cities all across Spain simultaneously shouted: “You won’t own a house IN YOUR WHOLE FUCKING LIFE!” The decibels radiating from this collective cry were registered by an interactive meter, baptised “The Fuck-o-meter” for the occasion. The sheer intensity and volume of this vociferation was reflected in real time and projected on a massive screen by a stage, whereupon a group of actors, showmen and activists hosted the proceedings for this grand public intervention. That was a day we made ourselves heard; man, did we ever make ourselves heard…

Bonus! We didn’t translate this one, because Leo is possessed of full English-speaking Ninjahood. See him here, waxing lyrical on the joys of the Spanish revolution…. 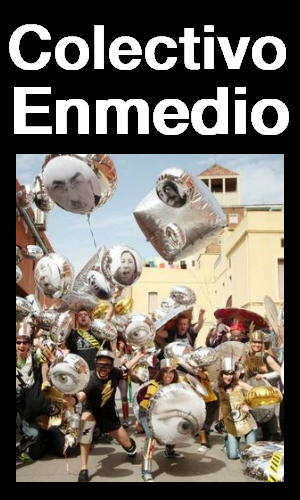 All the projects and movements he’s been involved with are as well known among the international art crowd as they are within down and dirty activist circles (Las Agencias, Yomango, Pret a Revolter, New Kids on the Black Block, V de Vivienda, etc.) Read more...