DIWO Co-op is a worker-owned co-op located in Madrid, Spain. They’re a sister-co-op to Guerrilla Translation, and they’ve continually delighted us with their friendship, advice  – and, hey, some kickass Guerrilla Translation badges like the ones featured above! We wanted to return the favour, so we’ve been translating and copy editing the static content on their English site.

Recently, they were featured on the Spanish TV program, “La Aventura del Saber“. This program forms part of a larger project, “La aventura de aprender“, which analyses the ways in which communities learn from each other and give back to the Commons.

The following video will be both familiar and inspirational to anyone who has ever been involved in a cooperative enterprise. In the interview, our beloved DIWOIDS Mamen Martín and Rosana Fernández talk about cooperativism and different forms of collaboration in contrast to individualism, and the differences between traditional enterprises and co-ops. Don’t miss Mamen’s tale about the financial advisor that urged them *not* to become a co-op because “they’d lose control of their company”, and their reaction.

The DIWOIDS misspoke twice during the interview, resulting in two small boo-boos. The original 15 M march was in 2011, not 2012; they also flubbed a point at the end while talking about the role of the coop’s general assembly. Those errors have been miraculously healed in our subtitle track! Amazing! All in the interest of clarity and accuracy. After the vid, we’ve included some of the info from their website.

Hit the “close captions” button at the bottom right to active our English subtitles for this vid.

We have some exciting plans coming up with DIWO for this fall, namely the launch of DIWOShop, in collaboration with Freepress Coop,  where we’ll be providing free translation and promotion services to a selection of ethical and environmentally-oriented enterprises. Watch for that! But don’t worry, we’ll keep you informed.

diwo coop is a worker owned co-op specializing in custom button/badge production and other kinds of merchandise for distribution. The co-op is made up of people with various professional backgrounds. We formed our project to help promote communications by and for groups, organizations and companies working for the common good and aimed at building more ethical and sustainable societies. We created diwo coop in 2012, building on and including our previous project, platypusLab, because we’re convinced that collaboration is the best way forward from the current situation of widespread precariousness.

platypusLab, specializing in badge/button production and distribution of customized merchandise since 2008, became part of diwo coop in 2012. We distribute within the EEC all of the following, among other items: 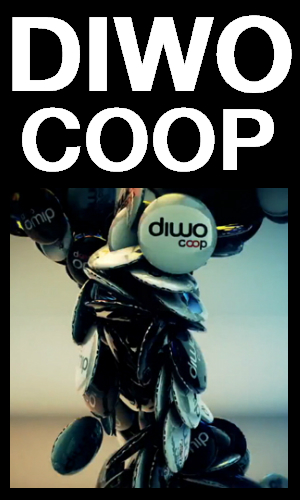 DIWO Co-op is a worker-owned co-op located in Madrid, Spain. They’re a sister-co-op to Guerrilla Translation, and they’ve continually delighted us with their friendship and advice. Read more...