An illustrated history of the biggest changes in our time: the globalization of the small and the reemergence of empowered communities.

At the beginning of the nineteenth century, most people were only identified by the real communities they were part of. An average European saw scarcely a hundred different faces in their whole life. The small, local, real community, with its barely-monetized agrarian economy, gave each person an identity that allowed him/her to understand who was who in the social system, and what role each one was playing in the production of everyone’s well-being. This is still the dominant identity in a good part of the rural world in developing countries.

But when the mercantile economy and the market, in larger settings, brought together production and consumption, a good part of the things that you consumed no longer came from your immediate surroundings; the result of your labor could travel hundreds, even thousands of kilometers, and tens of thousands of people already lived in cities. The old (real) identities no longer explained what we were for others, and what our work meant for them.

Towards the end of the seventeenth century, there appeared the seeds of what, two centuries later, would become the great imaginary identity of the industrial world: the nation. The nation had the new dimension of the state and the market, and allowed each one to imagine him/herself as part of the joint effort that kept afloat the economy in which they and their own real community lived. The world of nations was the world of the Industrial Revolution, but also that of the ascent of the large representative democracies and of nation-states. The world understood itself as a puzzle, as the sum of pieces, which were territories, states, and markets.

But at the end of the Eighties, the breakdown of the Eastern bloc and the collapse of the USSR changed the map of the world. The Western governments realized that, in reality, their businesses had symptoms that were alarmingly similar to those that led to the Soviet collapse. Part of the answer to the over-scale of their big businesses consisted of enlarging markets by reducing barriers to commerce. In 1993, the European Community became the European Union with the signature of the Maastricht Treaty, which consecrated market unity; in 1994, the free-trade agreement between the US, Mexico, and Canada was signed; and in 1995, the World Trade Organization was finally founded, after nearly 42 years of waiting and fruitless negotiations.

The greater freedom to purchase and sell anywhere the world, on principle, led big businesses to look for better and cheaper providers in developing nations.

Up until then, the key to Big Business had been integration — doing all the processes themselves — but little by little, value chains were broken: multinationals began to focus on design, technology and marketing, outsourcing production to smaller businesses scattered all over the world. The phenomenon is known as “breaking value chains.”

But in the ’90s, Internet use started to spread massively. The global network of information and communication started to look more and more like a distributed network.

The appearance of low-cost airline companies, and the drop in travel costs in general, accentuated this tendency even more.

In just a few years, the social impact was tremendous. In 1999, the anti-globalization movement appeared, bringing together and coordinating activists via the the Internet. This led to thousands of protesters from the five continents uniting in Seattle.

That same year, Ali Baba.com was born, a portal of small industries that soon passed 20 million businesses, which would become the best-known face of Chinese internationalization, letting the world know about thousands of new, low-cost products, from the electronic book to the vuvuzela.

The unity of globalization and networks allowed the “small” (including both countries previously considered “underdeveloped,” as well as SMEs, or small-to-medium enterprises) to begin to play on a new global board, and in many cases, to displace what had been an overwhelming hegemony of multinationals and rich countries in the market. We went from globalization to “globalization of the small.”

But “globalization of the small” is not a phenomenon that is exclusive to the new emerging powers. In general, what is appearing are models of the direct economy. In reality, it’s just the effect on the market of the move to a world of distributed networks, where everyone can connect and trade with everyone else, wherever they are, without intermediaries.

But, what happens to identity in a world like this? How will it evolve? In the direct economy model, the market is global, and each everyday product brings together work done on different continents. This is how national identity begins suffering from the same problem that created it. It no longer provides a satisfactory explanation of what our work has to do with the welfare of our real community, a real community that also includes those transnational virtual communities we are part of and which we care about more and more. In that sense, the nation has become too small to fit us.

But, on the other hand, it’s also too big for us. In the end, what matters to us is the real community formed by our families, our surroundings and the people that we share conversation and learning with on the Internet. Real people that the Internet, on the one hand, and the crisis of imagined identities on the other, have put at the center of the way we understand the world.

But, what’s the alternative? Everyone knows and is part of conversational communities on the Internet, and that can give us a good clue. There are three big differences between the networks born of conversations on the Internet and those born of living or working in the same place. The first is a question of costs: the cost of leaving a virtual network is low, while that of leaving a city or a town is high.

The second is a question of choices: on the Internet, we form networks with those who interest us because the conversation interests us; however, it’s hard to choose the neighbors and workmates in the community one was born in.

The third has to do with distance: conversations on the Internet are delimited by languages that we each use, not by where the participants are. When virtual communities are formed, they share an identity of their own based on the conversation, context and knowledge that they develop. How could we not feel that virtual communities are liberating? We don’t remain in them because we feel obliged, or because the cost of leaving them scares us; we form them with those who interest us — their passports don’t matter. Only what you say and contribute counts.

However, virtual communities and identities have a large “but,” even if we compare them with the old, national “imagined identities.” By being based on conversations between people that don’t share an economy, it’s difficult for them to be “complete” identities, capable of explaining the relationship between who you are in the community, what you do for it, and the results of your work. And that…that is important for an identity.

But that doesn’t happen in the world of the direct economy. The movement started in the Nineties, in a relatively small world. Used to meeting and collaborating in a network, no small number of groups of developers began to set up businesses starting in community, maintaining their transnationality and even deciding not to have a central headquarters. This is how businesses that are famous today, like MySQL, 37 signals or Monty Program, were born.

Programming, consulting, digital publishing, graphic design, and in general all the services that can be commercialized directly via the the Internet, were the natural point of departure for these first experiments in transnational communities that begin to provide themselves with a direct economy. Today, we are seeing the birth of a whole sector of the industrial direct economy, but also global networks linked through productivity, from ecovillages to the first transnational cooperatives.

Being used to equality in conversation and to working in a network as peers, these transnational communities will naturally tend to experience forms of economic democracy, from cooperativism to networks of freelancers.

The result is an empowered, transnational real community with businesses organized according to the principle of economic democracy. The phyle.

That’s why phyles go far beyond the classic models born of the virtual world. Since the Nineties, the phyle has been the trend in many communities of different types, from millions of African Sufi Muridies, to conservative Christian movements like the Focolare movement, plus ecovillages, co-living, or the rebirth of the kibbutz. Community empowerment with democratic economies and transnational approaches is the key to a new communitarianism.

Why? In large part, because the traditional socially cohesive models were based on the centrality of the state or of large corporations. They are centralized models that made us depend on a single power for the basic sustenance of social cohesion.

But we must not forget that the whole story we’ve told is, for the world of big corporations, a true crisis of scales. In the 80s, neoliberal policies (securitization, financialization, social cuts) gave the first response from the state in favor of those large businesses. The ’90s bet on a model of globalization that, as we’ve seen, would turn against it with the globalization of the small. Financial deregulation and speculative financial models would provide the rest in the first decade of the new century… and the result was an unprecedented crisis, in which the State and businesses shed the “ballast” of social cohesion.

Social costs have been and will continue to be enormous, generating unheard-of increases in social and regional inequality.

That’s why community and cooperative models are returning, models based on democratic criteria, which take full advantage of the experience of transition towards models that point toward a P2P mode of production…

…but also — and this is why phyles are so important in the debate — starting from a transnational logic that goes beyond solidarity and local development models.

Because, the reality is that we’re not in a battle between an old world (of nations and big businesses) and a new world (communal and transnational at the same time), but rather, we are facing the decomposition of the old world. That is why the vacuums of social cohesion are immediately occupied, on a transnational scale, in violent, criminal ways, from global Big Gangs to cartels, or Al Qaeda.

This is how the whole “new communalism,” from P2P talks to debates about the FLOK Society, including the new North American cooperativism, mutualism, or the movement of the ecological economy, represent the attempt to contribute non-universalist global solutions that are not based on imagined and abstract identities, but rather on real communities, through the development of community economies capable of sustaining well-being in a network. Resistance by the old powers to the globalization of the small and the vibrant freedom of distributed networks has left us a dramatic panorama of globalized decomposition. Within this map of reasons for pessimism, we find hope where postmodernism resists decomposition, along with the reemergence of real human community and the decline of universalism. They are more than good news: they are the foundation of a new world, and certainly, of a variety of worthwhile futures. 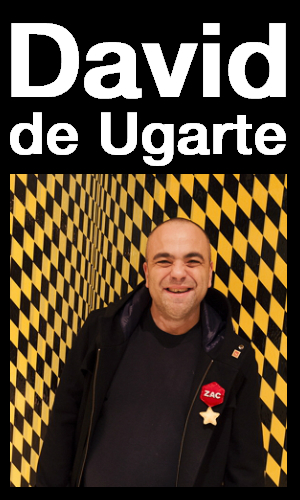 David de Ugarte. Economist, technologist and entrepreneur committed to new models of economic democracy. Founder and theorist of the Spanish cyberpunk group (1989-2007), founder of Piensa en red SA(1999-2002) and later of the Cooperative Society of las Indias Electrónicas (2002) and of the Cooperative Group of las Indias, in which he’s in charge of new project development. Read more...