I recently had occasion to visit Disneyland (Paris) with my partner and our two children. Besides the obvious thrills to be had in this vast compendium of fairground attractions, it was quite an odd experience to see this peculiar slice of America transplanted to a rural area outside Paris. The first thing that struck me is that the park sits in an empty field; I mean, it’s literally in the middle of nowhere. This reinforces the impression of Americanism, since the United States has always cultivated the (strictly utopian) myth of a country sprung from nothing, a place destined for the institution of a new society; the purest expression (or the expression of purity) of certain political and ethical principles. Disneyland is an Island crammed full of Utopia. It’s the same in Florida and California, but here, so close to Paris,  that radiant symbol of Europe’s characteristic historical abundance, the contrast between the New World and the Old widens.

History is present, very present, inside Disney’s amusement park. More-or-less realistic set pieces are everywhere, evoking all sorts of periods and places: a Western town, a Hollywood neighborhood, a fairytale medieval castle looming over the main walkway, a Native American teepee village, a fantasy Arabian bazaar, etc. There’s plenty of history, but it’s all crafted from papier mâché; it’s history represented through a series of stereotypes. A timeless historical spectacle: history where time is replaced with an empty, indifferent space, unfolding an arbitrary succession of theme parks and sub-parks. History in Disneyland is history unburdened, where it’s enough to know the one or two things that will allow you to say: this is the West, this is Aladdin’s Near East, this is Pocahontas’ Indian village. Condensed this way, history becomes a launch pad into unbridled fantasy, with reality no longer an obstacle. As long as they’re defined by clichés, there’s no limit to the worlds that fit into Disney’s universe. History becomes a frame for stories, a varied range of fantasies where the reality of current America seeps through. A variety which, deprived of real dimension and all that’s beyond the scope of narrative signifiers, turns into repetition of itself.

A series of emotions awaits the visitor in this setting of timeless, unreal history. Most outstanding is the physical sensation of the rollercoaster, derived to infinity over various “thematic” set pieces, with varying levels of “risk” and various degrees of vertigo and shock. The set-up is always the same: an ascent, then a fall, followed by some often violent turns which, at times, test the limits of what one can stand before falling prey to panic. But in Disney’s World there is nothing to fear, as it’s all under control: everything is secured, just like Baghdad’s Green Zone or an occupying army’s armoured tank.

The way in which the masses are herded by gentle, even kindly, methods is nothing short of astonishing. Attracted by the “attractions”, they flock to their vicinity and spontaneously arrange themselves into queues, often quite long, which flow into metal barriers folding in on themselves to separate and contain the masses awaiting their turn. It’s reminiscent of the equipment used in slaughterhouses to guide livestock in, or to channel the flow of people though sensitive border crossings in the EU – distinguishing the chosen, with their documents and money, from the condemned who lack them. The big difference is that here it is voluntary and you pay for it. There’s something disturbing about this self-imposed order that hardly requires the use of language, with the way it channels the flow of a multitude so it becomes a mass. A curious sort of wordless self-management, mediated by metallic barriers. Temple Grandin, author and doctor of animal science as well as a high-functioning autistic, devised a series of devices for cattle containment currently being used in many livestock operations. These devices have no need for words, they only require a specific arrangement of the metal elements within which the animal is contained, and through which it can only move in one direction. Temple Grandin claims that, being autistic, she can think “in pictures without words”. Consequently, she states that, when conceiving a structure, “Every design problem I’ve ever solved started with my ability to visualize and see the world in pictures”. Without a single word and divorced from “the other” implied by language, that same other that you ask something of or give orders to, her mechanisms channel cattle and people alike, effectively and nonviolently.

The queue is essential to the ride. First of all because, after the initial stretch which flows through the metal barriers, it runs through a kind of theme-zone. Some of these are fun, like the Star Wars spaceport, where robots from Lucas’ films welcome visitors awaiting their turn, while the walls display funny travel ads for other worlds, or the recreated seaport in the Nemo attraction. It’s important for people to wait because, not counting the queues, the attractions themselves are very brief (between 2 and 5 minutes). The visitor could easily go through them all in a couple of hours. Long lines are also important because the mere existence of the queue confers value to the attraction: admiring comments are often overheard in relation to one, or even two hour queues. In market logic, the scarcer and more inaccessible something is, the more valuable – even though, in the end, it’s all variations on the same theme: the rollercoaster or its substitutes. This imitation of desire becomes the prime value factor for these rides: we want them because the other wants them, blinding us to their repetitive, even tedious, character.

The actual content of the “star” attractions, most of them variations on the experience of freefall, is an experience of terror under strict immunizing conditions. You can, for example, witness a collision between a starship and an asteroid from the cozy, safe interior of your ship: just a slight tremor on the floor, blinking lights and even a few burst of flames, rapidly extinguished by sprinklers. You can also experience freefall from the inside of an elevator, without anything really happening. The rollercoasters shove people around, spinning them 360 degrees and, oftentimes, leaving them upside down, or shaken and crashed against the vehicles’ walls due to the abrupt, fast turns. All of this on top of the sudden descents. It’s all very impressive, it’s all very innocuous. The fact is that the logic of containment is also applied here. Passengers are tied down and retained by devices that impede their movements and cushion the brunt of any possible impact. One goes through experiences which would be life-threatening under normal conditions, safely held by a tight-fitting body security apparatus. Bodies that grow into the machine as they’re protected by it: in this way you can gaze into the abyss or feel vertigo, maybe even feel a bit of terror…. free from all fear. Nothing happens in Disneyland , everything is under control. We only need trust in a charitable power that will keep our movements constrained within effective devices, keeping us amused. You can then experience the ghosts of destruction and death from a perfectly secure standpoint. The ghost, as described by Jacques Lacan, is a “window onto the real”, which is to say, to the unbearable and, in particular, to death and castration.

At the entrance to one section of the park, the worn out visitor encounters a statue of the ineffable Walt Disney, founder of this grand utopia of immunized emotion. Wearing a suit jacket and a big smile, one hand extends forward, inviting entrance to his kingdom, while the other holds the hand of Mickey Mouse. It’s impossible not to compare this image with those of Lenin and Stalin, which proliferated in the urban landscapes of the old Soviet Union, or still stand in North Korea. These societies that believe, or used to believe, in totality and the end of history, have much in common with Disney’s dreamland; as in Disney’s world, the aim is to create isolated worlds where nothing happens. Of all the insular utopias, Disney’s fantastical and commercial variant – this highly effective ideological apparatus for the fiercest of Americanisms, now successfully embedded in the heart of Europe – has outlasted and fared better than the rest. This may be due to its being surrounded by the neoliberal ocean, where some opined that history was called to an end. Let’s not fool ourselves: it’s nothing more than a ghost. Disney invites us to experience disaster without consequence, to innocently contemplate the imminent catastrophe, we are beckoned to imagine death or the end of the world. But all of these ghosts protect Disney’s utopia and the deep neoliberal ocean surrounding it from a destiny to them more intolerable than the end of the world: the end of capitalism. That is the only product they have no interest in selling us.

Special thanks to Paka McDirham, for her production work in making this translation happen

This translation has also been republished in: 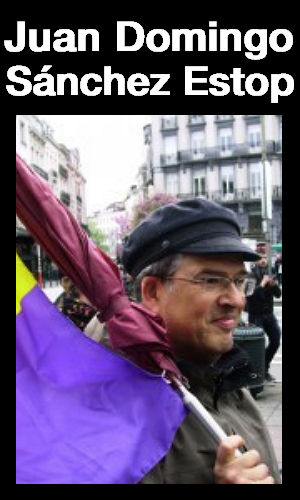 Juan Domingo Sánchez Estop taught modern philosophy in the Universidad Complutense de Madrid from 1981 to 1986. He translated Spinoza’s correspondence in Spanish and, as a member of the Association des Amis de Spinoza, took part in seminars and congresses in France and Italy. Read more...